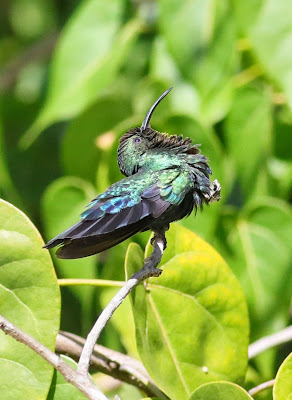 I went with Megan to Barbados for a science conference, which was generally 3 hours of talks a day that, for the most part, I could follow the overall ideas but the details were a wash of terms I didn't know.
But the afternoons were ~5-6 hours of wander around and get photos or swim/snorkel which was quite fun. And this shot is going to go into that pile of damn awesome photos I keep.

A variety of other bird photos made me pretty happy but I suspect most other people won't care so really quickly some more birbs. Before dinner, there was a mandatory get together on the shore to enjoy a beverage and watch the sunset. This lead to some fierce competition around sunset photos.

I did try a variety of shots and styles. These are from a 100mm lens and long exposures. The ones taking during the actual setting of the sun are sadly not particularly interesting but after the sun set I got some interesting shots. 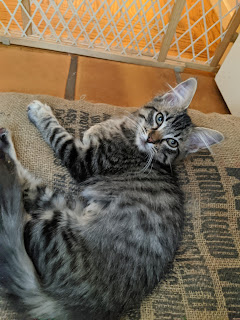 A tiny kitten by the name of Faustus has entered.

She has made a heck of deal. 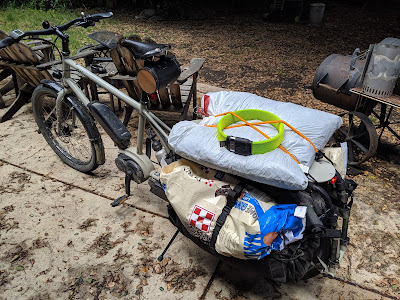 I've been trying to live this car-lite lifestyle for a while now, and while we have gotten to the point that the insurance company requires to prove that we drive our car as little as we say, there still have been some forces that make getting stuff by car so much easier I fallback to that.
Getting to SF continually is one of those intractable issues as it really requires upgrades to the overall mass transit and any other solution is either significantly slower, or has has very harsh consequences in small changes in schedule (The last train on Sunday is 9:37pm ... missing that is expensive.)
That said some problems, getting chicken feed, and other hauling tasks seemed fixable with the right bike.
Introducing the Surly Big Easy e-bike, carrying 100 pounds of chicken feed.
The feed store is about a 6 mile bike ride, and it took about 20ish minutes to do in this setup (averaging 14-15 mph), loading the bike took probably 5ish minutes.
Bringing 7 folding chairs and an empty cooler …